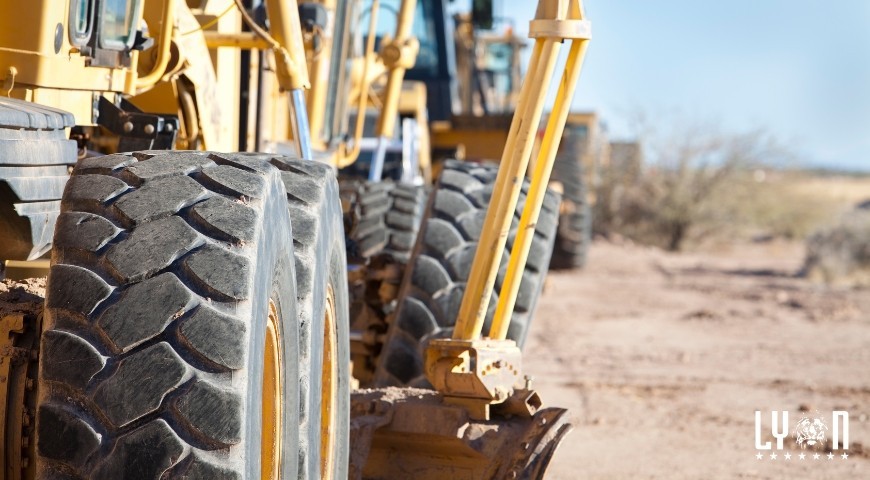 This winter, be sure your company has the right equipment and is ready for the snow. There’s no telling how much snow we’ll get, so it’s best to prepare for the most. The right equipment will help you move snow efficiently. If you’re looking for heavy machinery this winter, try one of Lyon Auction’s equipment auctions. We wanted to give you a rundown of the best machines and attachments for the job!

These are best for plowing snow in small areas, like parking lots or in-between buildings and fences. These machines are compact and are able to work well in tight areas. Skid-steers are versatile and have many options for attachments. They may be small, but they can take care of large amounts of snow. You’ll also need to choose between wheels or tracks; wheels are great for traction and tracks work better on slick surfaces.

All-wheel steer loaders can plow snow in a variety of different terrains. Like skid-steers, they work well in smaller areas. If you need something easier to operate that can still push large amounts of snow, this machine is a great option. They’re able to clear paths in the snow and they have great traction on icy surfaces. Skid-steers and all-wheel steer loaders are both open-cab, so consider a model with an enclosed cab to keep employees warm in the cold weather.

Backhoe loaders are best when it comes to digging and plowing through the snow. They can handle all types of snow, and they will lift and compact both the fluffy, new snow and heavier, wet snow that has been sitting around for a while. Backhoes allow you to switch attachments easily without having to get out of the cab. Plus, some models even have a heater and heated seats in them.

Wheel loaders are able to move large amounts of snow successfully; we’re talking several feet of snow. The large windows on wheel loaders give the operator great control over what they’re doing, as visibility is at its peak. They also have headlights, which is great for working during late nights or early mornings. These are better for larger spaces.

Mini track loaders are good when it comes to even smaller spaces, like sidewalks. These are the smallest and most compact vehicles. They work well for lifting and moving snow. It’s important to know that you will not be sitting in a cab while operating this machine, rather you’ll be pushing it from behind, so dress warmly to avoid frostbite.

These big guys are mostly used for snow removal on highways and roads. Even if you need to remove snow off a road with bumpy terrain, utility vehicles can do it. They have four-wheel drive and tires specifically for traction. You can also use a variety of different attachments.

Motor graders can remove snow over longer distances. The government often uses these in their snow removal programs. They allow for a variety of different attachments, too. They come equipped with a moldboard, snow wings, V Plows and straight blades.

Every attachment has a different purpose, but all can be used in the removal of snow. Common attachments for winter are buckets, snow blowers, V blades and snow pushers. Snow buckets are able to move large amounts of snow from one place to another. Snow pushers are able to push lots of snow, while snow blades can remove snow quickly and efficiently, even on rough terrain.

Get the machinery you need at our equipment auctions

If you attend one of our upcoming auctions this winter, you’ll find good quality snow removal equipment. We have a variety of secondhand heavy machinery and attachments at our equipment auctions. Contact us today for more information!